Posted in Automotive by Conner Flynn on February 19th, 2008 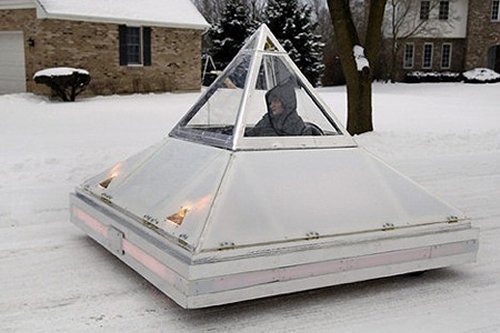 Looking eerily like something out of old low budget Sci-Fi movies, this pyramid electric car weighs 8,000-pounds and is powered by 80-batteries, with four engines. It can supposedly reach speeds of up to 45mph. I love how the canopy pops open like a Colonial Viper from Battlestar Galactica. It was built by a Father and his two sons. Check out a video after the jump.

The “Dream Car” is solar powered, on four wheels. The vehicle can run for 80 miles on a single charge, taking about four hours to charge the battery. It’s got some extras too. An in-car heating system for one, electric brakes, gel-filled tires and cool neon lights. This was obviously a labor of love as it cost the Zanises $60,000 in supplies, and a ton of hours to build. They’re now looking for financial backers, because they need $40,000 to build a Mark 2 prototype. They would like to get the range up to 500 miles.

Awesome job. I think they should put some more lights on the thing and cruise down country roads at night. Then laugh hysterically at the UFO reports the next day.