Posted in Thermometers by Conner Flynn on February 24th, 2008 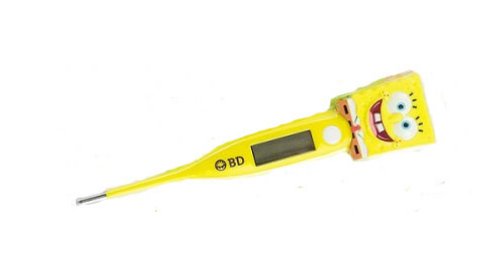 It never ceases to amaze me just how many SpongeBob related products are on the market. You would think his popularity would wane, but he must have nearly as many products as Star Wars by now. It also amazes me, how some of these products are not very well thought out.

For instance, this SpongeBob thermometer. It’s all cute and kid-like and la-de-da. It will even play music while being used. It actually plays the “SpongeBoob SquarePants Theme” which is all well and good, until you realize that this thermometer is for “oral, underarm AND rectal use”. Puts a whole other angle on any music playing cuteness. I mean really, is it weird for a kid to have a Spongebob’s head sticking out of his butt, playing the theme song? You tell me.