Posted in CES 2008,HDTV,Soyo,Television by Nino Marchetti on January 8th, 2008 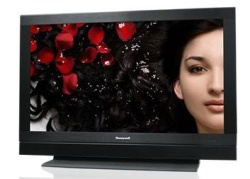 Soyo, a developer of consumer electronics products, is showcasing at CES a new line of televisions being branded under the venerable Honeywell label. These televisions are known as the Altura LCD HDTVs and will come in a variety of sizes ranging from 42 to 82-inches (damm!).

The Honeywell Altura LCD HDTVs share a variety of features in common, including full HD 1080p, SRS TruBass and TruSurround, Dolby Digital ProLogicII Sound and MTS/SAP, a/v stereo and a dynamic contrast ratio of 120,000:1. You can read more about this line up of Honeywell televisions via the full press release after the jump.

SOYO Inc. (OTCBB:SOYO), an innovative provider of computer and consumer electronics products, today announced the Honeywell line of Altura(tm) LCD HDTVs, the first TV produced under the Honeywell Brand name. The Honeywell line of Altura(tm) LCD HDTVs feature full HD 1080p resolution and will debut at CES in January 2008. This line of HDTVs were designed to fit into the consumer and commercial markets, and are made of steel with a brushed aluminum bezel for a durable, elegant and unique flat-panel design. The 57 inch, 65 inch and 70 inch models will be on display at SOYO’s booth, #7922, in the Central Hall at CES.

The Honeywell line of Altura(tm) LCD HDTVs include the following features:

— Guide depicting how to choose the best HDMI cable for the Honeywell
Line of Altura(tm) LCD HDTVs.