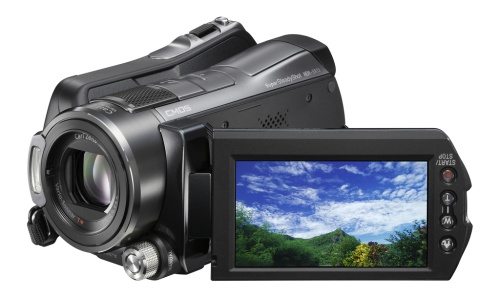 The consumer electronics giant added that all these new camcorders feature a new high-profile encoding system and, depending upon the model, offer other must haves like high resolution digital still captures and hybrid/hybrid plus movie recording.

You can get the full details of these new Sony HD camcorders after the jump.

LAS VEGAS(CES Booth 14200), Jan. 6, 2008 – As the leader in the high-definition camcorder category, Sony is further expanding the industry with the introduction of six new HD models.

The HDR-SR12, HDR-SR11 and HDR-SR10 hard drive camcorders, along with the HDR-UX20 and HDR-UX10 DVD models, are all based on AVCHD™ technology and feature full 1920 x 1080 high-definition recording for outstanding clarity and detail.

They deliver the highest HD resolution available without sacrificing recording times. All of them feature a new high-profile encoding system to optimize encoding efficiency. And, because they are based on the industry-standard MPEG-4 AVC/H.264 video codec, they are entering the market compatible with many third-party editing suites.

“With a total line of seven models and four recording media options, no other company offers customers more choice,” said Kelly Davis, director of camcorder marketing at Sony Electronics. “And, our new AVCHD models give consumers the utmost functionality to better enjoy creating and viewing their home movies in HD.”

Face Detection for Video and Photos

Sharing advanced imaging technologies from Sony’s digital camera line, these AVCHD camcorders incorporate face detection technology for both video and photos. The technology can identify up to eight faces in the camcorder’s LCD frame, and automatically adjusts focus, exposure, color control for natural-looking skin tones, and when photos are taken, flash control.

Unlike other Handycam models with face detection, these camcorders allocate more pixels to the detected face during the AVCHD encoding process for the best possible picture when people are the subjects.

Other technologies include ClearVid™ CMOS sensors with Exmor™-derived technology. This technology utilizes column analog/digital conversion on the sensor itself to minimize picture noise.

Together with the high processing speed and noise reduction capability of the Bionz™ processing engine and dynamic range optimization, the new camcorders produce high-resolution video and photos with natural color reproduction and rich details.

Focus and image quality can be checked with much greater accuracy on the 10-mega models with their 3.2-inch, Xtra Fine™ (16:9) wide LCD screens with a wide viewing angle (160 degrees) and ultra-sharp resolution (921K).

Hybrid and Hybrid plus Movie Recording

The 120GB SR12, 60GB SR11, and 40GB SR10 camcorders provide extremely long continuous recording times (1920 mode) of nearly 15, seven and five hours, respectively. They also feature hybrid movie recording on optional Memory Stick PRO Duo™ media cards, as well as their built-in hard drives. Recording times on the media card will vary depending on capacity, but nearly two hours of video (1920 mode) can be stored on Sony’s new 16GB media card. Both movies and photos can be transferred from the hard drive to media card in the camcorders without having to use a PC.

The UX10 camcorder also features hybrid movie recording on the media card and up to an hour of continuous recording (1440 LP mode) on a DVD +R double-layer disc.

All record in Dolby® Digital 5.1-channel surround sound and newly integrate built-in zoom microphones that zooms the audio along with the video for clear recordings of subjects. They are also compatible with Sony’s ECM-HW1 Bluetooth® microphone for recording sound wirelessly at distances up to 100 feet.

DVD Creation for Playback and Archiving

All models allow for quick data transfer via USB from the camcorders to compatible devices like DVD burners and recorders such as Sony’s VRD-MC5 DVDirect® recorder. This recorder newly supports 1920×1080 HD video recording as well as video transfer from Memory Stick media (firmware update required).

HD video recorded on DVDs can be played back on compatible Blu-ray Disc™ devices, including Sony’s Blu-ray Disc players and PlayStation® 3 video entertainment consoles, as well as on standard DVD drives on compatible PCs with the bundled software.

This model offers extensive manual controls to meet the demands of advanced videographers, including “focus to infinity;” spot meter and focus to change exposure and focus at the same point at the same time; center mark to use as a guide frame in the LCD screen or viewfinder; and peaking to facilitate better focusing by outlining objects with a color line. White balance, shutter speed and focus can also be adjusted manually.