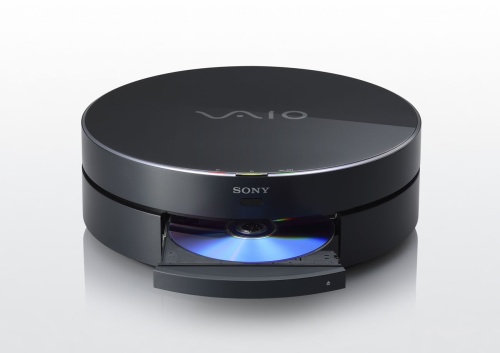 Sony used CES this week as a platform to unveil a HD version of one of its computers. This “spherical digital living system” is called the VAIO TP and it will be available later this month in a standard version for around $1,600 and a premium version at around $3,000.

The updated VAIO TP is now HD friendly, according to Sony, and can support playback of premium HD channels when separate CableCARDs are plugged into it. This option though is only available on the premium version. The upside though is both versions come with a Blu-ray Disc optical drive.

Get more details on the new VAIO TP after the jump.

A unique approach to the home PC design, the new model’s round chassis serves as an entire entertainment center, where you can watch and record analog, digital and cable TV, including premium HD channels (CableCARD™ required). It can also access the Internet so you can play back online TV programming on a compatible big-screen television.

The VAIO HTPC comes in both a standard and a premium configuration. Both versions feature a Blu-ray Disc™ optical drive to enjoy high-definition movies. The premium model comes with two external CableCARD compatible TV tuners so you can view and record two HD television programs simultaneously.

With built-in DVR functionality, each unit can record up to 50 hours of HD television programming and pause and rewind live TV for on-demand playback.

Engineered to be easy to use, the models connect to compatible high-definition televisions via an included HDMI™ cable for playback in full HD 1080 resolution through a single cable. And with integrated BRAVIA® Sync™ technology, based on HDMI-CEC functionality, you can power on connected devices, at the touch of a button, eliminating the need for multiple remote controls (on certain BRAVIA HDTV models only).

“We’re defining the digital home by integrating the latest HD technologies into a one-of-a-kind showpiece,” said Mike Abary, senior vice president of VAIO product marketing at Sony Electronics. “This new unit will revolutionize the way you watch TV, allowing you to turn your entertainment center into an eye-popping, high-definition media hub.”

Designed to Compliment Any Home

The console’s small, circular shape is engineered to fit into areas of the house not typically known for having a PC, such as the living room, without the added network cables. With its built-in wireless LAN technology and a wireless router, it can be positioned virtually anywhere in the house and still access your home network.

The model also comes with a remote control and a matching, wireless keyboard ergonomically designed to fit on your lap so you can surf the Web from the comfort of your couch without the restraint of tangled cords.

Power of the PC for Your Living Room

The VAIO TP Home Theater PC standard model, available in polar white, will start at about $1,600, while the premium model, available in piano black, will go for around $3,000. Both will be available online at www.sony.com/pr/tphd and sold at Sony Style stores and select retailers around the country starting later this month.