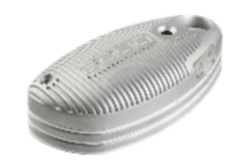 Better Energy Systems, the company behind the eco-friendly Solio Classic hybrid (solar/wall socket) handheld electronics charger, is at CES with a new charger it says packs almost double the power of the original. It’s called the Solio Magnesium and it is being priced at around $200.

The Solio Magnesium is capable of fully charging a cell phone approximately three times. It “combines efficient solar cells, a powerful internal battery, and a rugged, environmentally friendly magnesium alloy shell.” Compatibility exists with the iGo tip system for supporting the charging of multiple types of devices and includes a female USB for an iPod.

Other features of the Magnesium include four foreign outlet adapters, maximum output of eight watts and solar panel performance of 0.85 watts. You’ll find this charger is available in February.