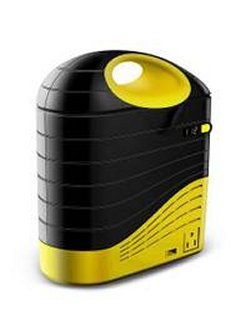 This water-activated “portable power product” is fuel cell-based and through the use of $20 disposable cartridges, it will provide “enough energy to recharge an average notebook computer 8 to 10 times” or even “operate low power devices such as portable lights, notebook computers, portable televisions etc. for more than 14 continuous hours,”. It works via AC outlet or dual USB. The unit will cost about $400. A few of the nicer features on this one are that the HydroPak is quieter and lighter than other types of generators in it’s class, and as a bonus, it doesn’t spit out horrible emissions.

At CES 2008, they will also have a smaller version named the HydroPak Mini, which is a prototype designed to power gadgets like cellphones or your favorite game systems. They expect to have units available for sale in mid-2008.