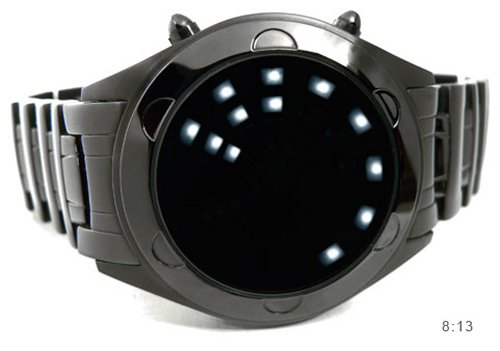 In William Shakespeare’s “A Midsummer’s Night’s Dream” the name of the King of the Fairies was Oberon. He is also the King of the Shadows so something dark might be befitting of a name worthy of this deity which is precisely what the makers of the latest new watch design from Tokyoflash were probably thinking. Like most of the watches offered by these fellows the Oberon dispenses with the tradition two hands and minutes/hours number divisions in favor of patterned LED lights. When you read the time on the Oberon you start by looking at the outer ring of LEDs to determine the hour, the second ring of lights determines what minute it is and the third inner ring is devoted for grouping minutes into blocks of ten. It might sound complicated but picking it up is fairly simple and only takes a few glances at your watch. The watch will also tell you what date it is, all you need do is press a button and you can do that by LED lights too.

The Oberon watch is water resistant and comes with a one year warranty. The Oberon costs ¥14,900 or about $130 Yankee dollars.