Posted in R/C Toys,Robots,Sci-Fi,Toys by Conner Flynn on December 26th, 2007 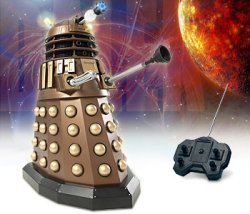 I wish I had known about this one before Christmas. I would have put it under the tree for myself. He would be a great companion to the Dalek Web-cam or K-9 remote controlled dog. As any Doctor Who fan knows, Daleks are out to destroy all life in the universe and generally hover around saying “Exterminate. Exterminate.”, before firing lasers at you and sending you to the great beyond, despite the fact that their arms are basically an egg whisk and a sink plunger.

This remote controlled Dalek is a foot and a half tall and able to track moving objects. Plus, you can direct him by radio control. The best part is that he responds to over 30 voice commands. He comes loaded with sound, movement and heat sensors, a bunch of sound and light effects, and his memory stores over 50 Dalek phrases. He’ll cost you about $180 but when you consider that this is probably the best R/C dalek ever, that’s a fair price. Just never EVER turn your back on him. They want to rule the universe after all.