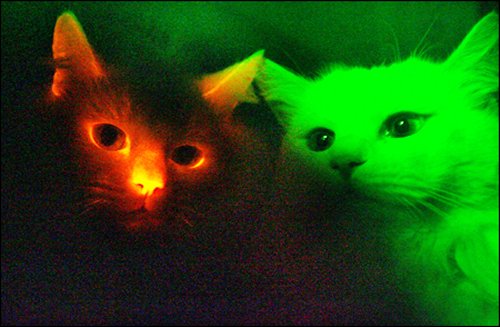 This next story should give you pause to think about what may be ahead in the near future for the emerging biotechnology sector. A science team at South Korea’s Gyeongsang National University announced that they have successfully cloned kittens that have a modified gene that alters their skin color. When placed underneath an ultraviolet light a unmodified cat will look green. These new genetically modified cats have a fluorescent protein inserted into their DNA which makes their skin appear red under the same kind of UV light.

Three cloned Turkish Angola kitties were born in early 2007 but one died shortly after. The two surviving cats now weigh 3.5 kilograms and appear to be perfectly healthy representatives of the feline race. Aside from being able to make funky colored critters the new procedure is hoped to be used for bringing back the populations of animals on the endangered species list as well as identifying and eliminating genetic diseases in people and pets.

What may also happen is that soon geneticists will be able to create animals that come in variety of colors outside the norm found in nature. Pink kitties, purple pandas and canary yellow lizards could be right around the corner, not to mention the uses for pets that glow underneath a black light found at raves. In all seriousness the issue could raise serious questions about how far science should be allowed to genetically modify a species and for what kind of purpose.

One of these days someone is really going to make their own “Jurassic Park”.