Posted in Games,Microsoft,Xbox 360 by Nino Marchetti on November 14th, 2007 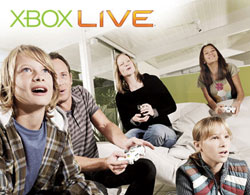 Can you believe Xbox Live, the online arm of Microsoft’s Xbox 360 video game console, turns five tomorrow? Neither can we. That being said, this is a shining example of an area where Microsoft held on to become a dominant force in a vertical category. To celebrate this crowning moment several announcements were made which should make things even more interesting.

For starters, Microsoft is giving away for free between 12:01 a.m. PST on Nov. 15 and 11:59 p.m. PST on Nov. 16 an Xbox Live Arcade game for download. Of even bigger interest to gamers, particularly fans of the original Xbox, is word of a free system update which will offer, among other enhancements, the ability to purchase and download original Xbox games. These Xbox Originals look to initially include Halo,” “Psychonauts,” “Crimson Skies: High Road to Revenge” and “Fable,” among others.

Microsoft said this new service will be available beginning December 4. That should be some good news to the over 8 million users of the Xbox Live service.