Posted in Apple,iPhone,News by Darrin Olson on November 29th, 2007 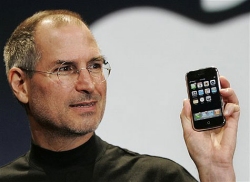 At an event dinner in California on Wednesday AT&T Chief executive Randall Stephenson said that consumers could expect the iPhone to be available on a 3G network as soon as next year. This change would solve one of the major complaints many have of the iPhone with its currently slower EDGE network.

Steve Jobs, CEO of Apple, has said in the past that the iPhone didn’t initially launch on the 3G network due to the restrictions the faster network put on the battery life of the phone. He also stated that the 3G capabilities may be available by late 2008, so this news in general isn’t too much of a surprise.

What is surprising is that Stephenson would make a statement like this in the thick of the holiday shopping season. A reminder that one of the major flaws of the iPhone could be resolved early next year might make a lot of people decide to hold off on buying one until the 3G service is available. Stephenson didn’t say that it would be early next year though, and declined to give any more details or exactly when next year this would happen.

Whether or not people wait to buy, the news of the iPhone getting hooked up with faster 3G capabilities is good for everyone. Owners can get faster internet surfing and downloads and Apple gets a more competitive mobile device for the U.S. and even more so in the European countries.