Posted in Games,Halo,Microsoft,News,Xbox 360 by Darrin Olson on October 20th, 2007 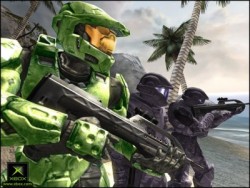 Sony’s PS3, despite sales promotions and price cuts today still remains the most expensive major game console available with the lowest count is sales. September saw 119,400 Playstation 3 units leave shelves which was beat out by not only Nintendo and Microsoft but also by it’s predecessor the Playstation 2 which sold 215,000 copies. Both of these were consoles were beat out by the Sony’s handheld PSP at 284,500 sold.

It should also come as no surprise that in games sales Microsoft led the pack with Halo 3′s launch moving an astounding 3.3 million copies its first month. The next closest game which in this case we can hardly call competition was Nintendo’s Wii Play selling 282,000 units.