Posted in Media Players,Meizu,MP3,music by Matt on September 20th, 2007 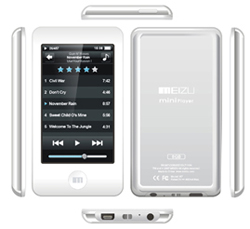 Illustrated right is a render of the Meizu M7 touch screen miniPlayer geared to compete directly with iPod Touch. The media player is targeted for a March 2008 release with a price tag that could draw business away from Apple for all but the most die-hard iPod users. The tentatively named M7 will sport a 2.8 inch touch screen with a 16:9 480×228 resolution and supports H.264 playback. At $100, $110 and $150 for 2GB, 4GB and 8GB models respectively, the M7 is likely to be a very popular iPod clone.

While a cheaper alternative to the Apple iPod MP3 player, its lower price likely indicates this Chinese manufactured Miezu clone will lack the quality and attention to detail that the Apple players have become known for. The design concept has only recently and hurriedly been announced so stay tuned for any updates.