Posted in Accessories,Nintendo,Wii by Reuben Drake on July 11th, 2007 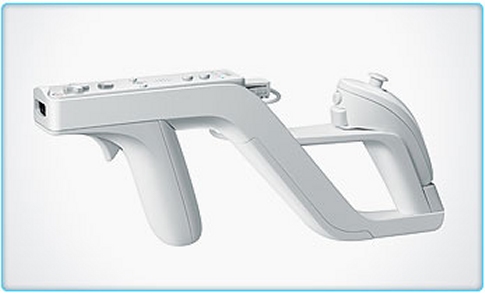 The Wii Balance Board might have gotten the biggest show but it certainly wasn’t the only cool thing Nintendo unveiled today. The Wii Zapper is a controller accessory that holds both the Wii Remote and the Nunchuk to make somewhat of an elaborate automatic weapon to use in game play. The sounds of on-screen battle can even be heard through the speaker on the Wii Remote.

Nintendo says the Wii Zapper name hasn’t been decided for sure, but the design is pretty much done. Planning on hitting shelves later this year, the Wii gun holder will be packaged with games from Nintendo that take advantage of the multi-controller configuration. According to Nintendo when launched the configuration will also work with Resident Evil: The Umbrella Chronicles, Ghost Squad and the new, upcoming Medal Of Honor.