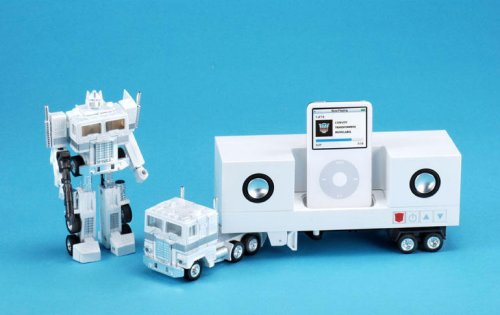 You know that the world has changed when Optimus Prime can transform into an iPod. While the movie took some artistic liberties with the design of Prime (hot rod flames?) Takara’s line of music Transformers pushes the envelope even further than that. Not only has Optimus lost all of his color but his trailer section now transforms into an iPod docking station. The tractor part of the Autobot still morphs into the same classic Prime we all remember so at least the old school fans won’t be completely aghast.

Takara is also offering an updated version of the Decepticon Soundwave except instead of transforming into a Walkman-style tape player he now can turn into a MP3 player. The tricky thing of the new Soundwave is that the player will dispense your tunes in either mode so you can transform the guy and listen to songs at the same time. Soundwave’s minions, Rumble and Frenzy, are the headphones and also transform into their robot alt modes.

The Optimus Prime iPod Transformer should set you back about $130, the Soundwave MP3 player is around $85 and the Rumble/Frenzy headphones are $25. Look for them on websites that ship Japanese electronics.