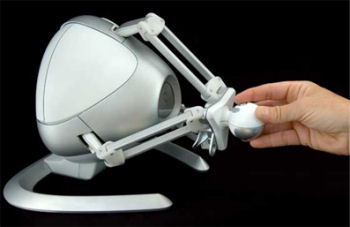 Force feedback joysticks have been around for over a decade but there hasn’t been a stick made that could simulate the three dimensions of an object until Novint made the Falcon. If you think this unit looks like a robot rather than a joystick you would be right.

The joystick element of the controller is raised above the surface of the resting platform so when you grip it with your hand you’re pushing at it in three dimensions. Sensors detect any movement that your hand makes, updating the data to your machine a thousand times a second and producing instant movement on the screen.

Novint claims that the Falcon can simulate realistic “texture, shape, weight, dimension and dynamics” of objects on your screen, like the weight of a basketball or the recoil of your shotgun in a FPS. To prove it they also will ship 24 minigames like air table hockey and another disc of sports games for you to try the Falcon out with. Right now the company has a sale on the Falcon so that $189 will get you it and free shipping too. You may never play “Half-Life 2” the same way again after getting one of these.