Posted in Accessories,Controllers,Xbox 360 by Darrin Olson on June 18th, 2007 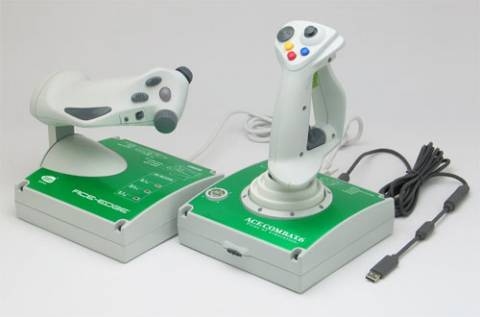 Namco Bandai is partnering with game controller maker Hori to offer a bundled package for the release of Ace Combat 6: Fires of Liberation. The bundle will include the game along with an Ace Combat 6 faceplate for the Xbox 360 and the Ace-Edge Flightstick accessory, which is the first flight simulator accessory made for the Xbox 360.

The Ace-Edge Flightstick controller consists of two pieces; a throttle controller and a separate flight stick. Both will be branded with the Ace Combat 6 design. This will be a limited edition bundle planned for this coming holiday season retailing for $149.99. Ace Combat 6 by itself is planned for release later this year for $59.99.