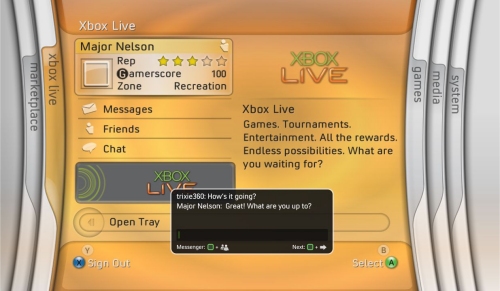 Microsoft has released the Spring Update for the Xbox 360 which is now available for 360 owners to download through their console. The Spring Update promises to increases communications through integrating with Windows Live Messenger and cut down on downloads that are not intended for your geographical area.

With the Messenger compatibility, Xbox 360 owners will be able to add up to 600 Messenger contacts to their Live account in addition to the 100 gamertag contacts. Up to 20 contacts can be on the same conversation and as many as six conversations can be held at one time.

Some other features in the updated dashboard include achievement pop-ups that contain more details such as showing what the achievement was and it’s value right in the pop-up. Microsoft has improved on providing downloadable content, including the ability to watch and navigate videos as they are downloaded in the Xbox Live Video Marketplace. Improved “family” control over video and voice chat has also been added.

The Xbox 360 Spring Update is available to Xbox 360 owners now through Xbox Live or the Xbox website, and according to Microsoft, a QWERTY keyboard for the Xbox 360 which attaches to the controllers is still on schedule for this summer.