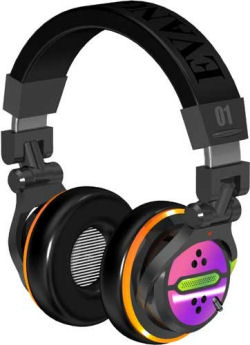 Ooooh, look at this! Fans of the Japanese anime “Neon Genesis Evangelion” are going to drool over the official collector’s headset that has a trippy design by Chara-Ani, a Japanese retailer of all things manga/anime, in partnership with Audio-Technica.

“Evangelion” is a big part of Japanese manga culture taking place in a future where mankind is fighting alien angels using a pack of surly teens inside of giant armored suits. Hey, it doesn’t have to make more sense than that for people to dig it (fans will know that the “01” on the headset’s side stands for the top of the line Evangelion armor.)

Chara-Ani is taking orders (up to a limit of five) now with an expected retail date of September 29 (price: 24,800 yen or about $207 Yankee bucks.) What, you didn’t think this kind of collector’s item would be cheap, did you? (You also get a collector’s box.)