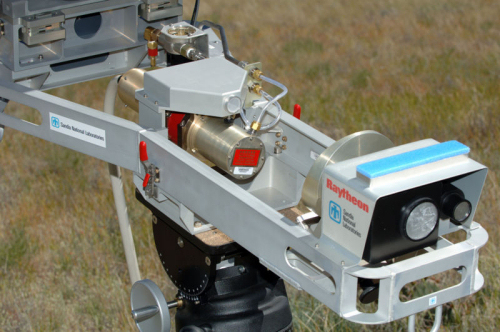 The military has been on something of a PR campaign with showing off its latest 21st century combat weapon, a mobile truck that can direct a blast of directed energy at a person up to two kilometers away causing them near-instant waves of pain. The so-called “pain gun” is technically described as the Active Denial System (ADS) and has been called the “Holy Grail of crowd control” by soldiers.

After being stationed by the driver, the square satellite dish mounted on top of the Army Humvee is aimed at the target by use of a video monitor and joystick. After the operator switches the unit on an invisible stream of millimeter waves (at 95 GHz) is directed at the target, exciting the water molecules on the body and rapidly causing the sensation that their skin feels as if it’s on fire. The end result is that the person standing where the ADS is aimed at wants to get out of the way pronto. When the person is examined afterward there are no marks on the body, just the memory of what happened and the dissipation of the sensation. According to the military no one has been able to withstand five seconds in the line of fire.

The ADS is the first in what the military hopes are a new wave of non-lethal, non physical weapons in their arsenal. Police are hoping that a scaled down version will be available for their own purposes inside of a decade. While the Army’s pain gun won’t be ready for active combat until at least 2010 that hasn’t stopped the Army from showing it off to the press – and in the case of an AP reporter, testing it out on him.