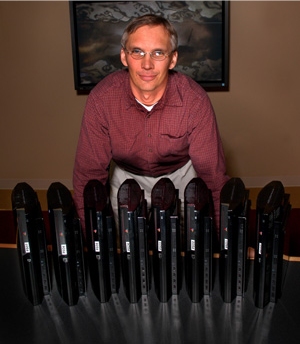 If this doesn’t tell the Sony executives that they better get a killer app game out for its PlayStation 3 sooner rather than later, we don’t know what will. Over at the North Carolina State University an associate professor of computer science went out and bought eight PS3 units and then clustered them together to combine their processing power. Apparently the demos for “Resistance: Fall of Man” wasn’t enough to impress Dr. Frank Mueller about the PS3’s gaming ability, but he can get a decent level of supercomputing processing power out of the 64 logical processors that are banked together.

Mueller admits that his Sony supercomputer solution is constrained by the 256 megs of RAM and networking hiccups, but for $5,000 the Cell chip architecture gives high enough performance for a relatively cheap cost. And, Mueller says, if he had 10,000 PS3s networked together he could create the world’s fastest computer. “Of course, here at NC State we will use it for educational purposes and for research,” said Professor Mueller, dispelling any hopes we had of a 8-player “Armored Core 4” deathmatch on campus. We would like to see what Professor Mueller would create with a Nintendo Wii or Microsoft Xbox 360 but then again the software for those consoles may distract him from his academic work.