Posted in Microsoft,Vista,Websites by Paul Patterson on February 3rd, 2007 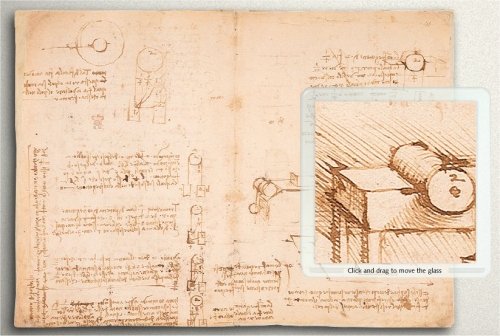 Leonardo da Vinci was one of the most prolific polymaths who ever lived. A true Renaissance man, his interests allowed him to succeed as a scientist, mathematician, engineer, inventor, anatomist, painter, sculptor, architect, musician, and writer. Leonardo’s studies were recorded in notebooks that were maintained daily throughout his life as he made continual observations of the world around him. Leonardo’s notebooks encompass over 13,000 pages of notes and drawings.

You now have access to page through the notebooks of Leonardo da Vinci thanks to a joint effort between Microsoft and the British Library. Two of da Vinci’s notebooks have been digitized for an updated version of an application called “Turning the Pages” which allows people to browse parts of the British Library’s 150 million piece collection via a web browser.

A new version, called Turning the Pages 2.0, has been developed for the Microsoft Vista operating system. Turning the Pages 2.0 allows you to ‘virtually’ turn the pages of the historic books. You can also magnify details, read or listen to expert commentary on each page, and store or share your own notes.

Being left-handed, Leonardo wrote from right to left. This created a mirror-image cursive that is indecipherable without the help of a mirror. It may be impossible to read, but you may be inspired nonetheless.