Posted in Flash Memory,Security by Darrin Olson on February 18th, 2007 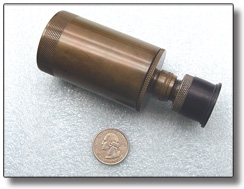 Any concerns about losing the data on your USB flash drive due to damaging it would be dispelled with this IronDrive from R&D Electronics. The rugged flash memory device has been tested to withstand moisture, vibration, shock testing from all angles, caustic agents, EMI, and even nuclear effects.

The IronDrive comes in different capacities from 32MB to 4GB and can be customized if needed. The device connects via a 12 inch USB 2.0 cable and is able to transfer data to and from Windows XP/POS/CE as well as Linux and VxWorks. It is also rated to operate from -40 C to +85 C. The first concern that came to mind was whether or not the memory would last as long as its enclosure, and the IronDrive has a MTBF (Mean time between failures) of 4.66 million hours and is rated to 5 million write and erase cycles.

The device even housed encryption provisions and looks nothing like any portable flash drive we’ve ever seen, which lessens the likeliness that someone would suspect its a data storage device for an added security feature. No pricing is available at this time although the IronDrive website lists it as cost effective as a “memory solution replacing specialized memory devices costing over 20 times more.”