Posted in Automotive,Ford,GM,News by Chris Weber on January 8th, 2007

US Auto manufacturers like Ford and GM are hoping hi-tech innovations will put sales into high gear. Ford recently announced a partnership with Microsoft to create Sync, a technology built into Ford vehicles that will allow the interface of devices like mobile phones and iPods to the automobiles sound system.

GM unveiled an all electric car that draws power from an onboard lithium-ion battery (just like an iPod!). GM calls this concept car “Volt.” GM tried and failed once before with its EV1 hybrid car. GM has improved on the features of the EV1 by increasing the passenger area, increasing the maximum spend and decreasing the charging time for the batteries. The car is unique in that the combustion engine is only used to charge the battery, not for actually propelling the vehicle. The Volt can either be recharged with its onboard generate or by plugging it in to a 110 volt outlet.

The Volt can run on normal gas or E85 fuel. It has a range of 40 miles on electric power only. This means that if you only drive 40 miles or less you can recharge the battery and not use any fuel. If you drive over that distance your gas mileage will decrease by a steady amount as the generator must kick in to recharge the battery. It is estimated that the engine will get about 50 mpg during this charging time.

The problem with the Volt concept is the lithium-ion batteries. They are much to expensive to use in a production automobile. GM is hoping that the technology will evolve in the next three years to allow it to manufacture a car like the Volt in an economic manner.

Check out the preview of the Volt

The Big 3 US automakers, GM, Chrysler and Ford have had difficult years as foreign competition from rivals like Toyota have eaten into their market share. Bill Ford, Chairman of Ford Motor Co. said “2006 was a difficult year..but 2007 will be a pivotal one.” 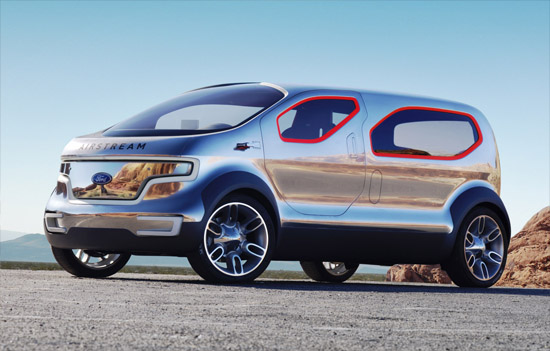 Ford introduced a concept van called the “Airstream” which was very noticeable because of its neon orange window trimmings and shiny silver body. Ford partnered with the Airstream company, known for their shiny silver rounded pull behind camper units, to create a crossover concept vehicle. According to Peter Horbury, executive director – Design, “Crossovers are an increasingly important part of our business, and Ford is going to continue developing an expressive range of these vehicles.”

The Airstream is notable for its electric drive which is powered by hydrogen. The drive is know as the “HySeries Drive” and is already on the road in the Ford Edge prototype vehicle. The hydrogen fuel cell is actually a plug-in design. 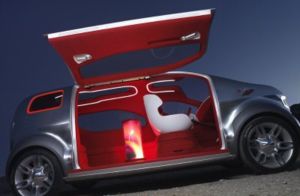 The inspiration for such a vehicle came from Stanly Kubrick’s movie 2001: A Space Odyssey. The interior contains a lavalamp/view screen in the center of the cargo/passenger area. The vehicles interior is meant to convey a lounge like atmosphere.