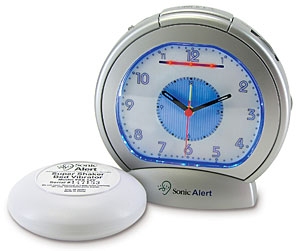 Sonic Alert has some sleep disturbing Sonic Boom alarm clocks that are capable of putting out a whopping 113 decibel pulsating alarm. The alarm clocks, first developed by a man interested in helping out his deaf grandmother, has grown into a line of products for the hard of hearing and hard to wake.

To get an idea of what exactly 113 decibels sounds like, being near a jet taking off is about 140 decibels, and a loud car horn next to your bed would be about 120 decibels. Needless to say if this alarm doesn’t wake you up, more than likely your neighbors will be over shortly after it goes off to help you out.

Sonic Alert has a variety of Sonic Boom alarm clock models, both analog and digital and all with some sort of lights that blink and a 12 volt bed shaker that will vibrate the bed in case the alarm isn’t enough. Some models have outlets built in that a lamp could plug into the alarm will blink the lights on and off to alert the owner of the alarm.

Sonic Alert has a number of products for the hearing impaired aside from alarm clocks, including signalers for baby monitors, telephones and doorbells.