Posted in LCD,News,Samsung by Paul Patterson on January 4th, 2007 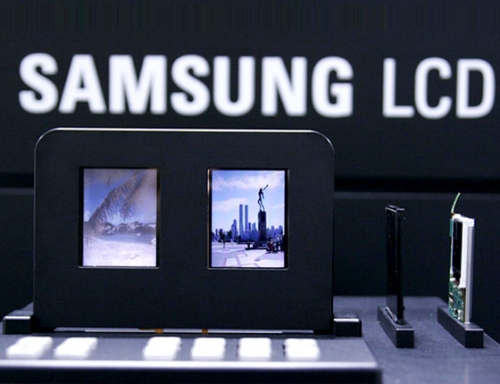 The technology will “accelerate the trend toward slimmer mobile products” by replacing two display panels with one, thus reducing overall thickness of mobile products by at least 1mm. The new double-sided LCD is 2.6mm thick and 2.22″ wide, with QVGA (240 x 320 pixel) resolution.

The breakthrough is made possible by use of Samsung’s new double-gate, thin-film transistor (TFT) architecture. TFT gates control the necessary voltage at the pixel level. Samsung’s new double-sided LCD uses two gates which allows the front screen to display different images than the opposing screen on the back.

In addition, the new mobile display requires only one backlight – while competitive double-screen LCDs require two. One side of the panel operates in a transmissive mode, the other side operates in a reflective mode. This design utilizes the light trapped in the opposing screen’s transmissive mode and does not solely rely on external light sources. This efficient use of light promotes slimmer and more cost-effective products.

The display will be exhibited at the Consumer Electronics Show in Las Vegas on January 8. Samsung is expected to begin mass production in the first half of 2007.