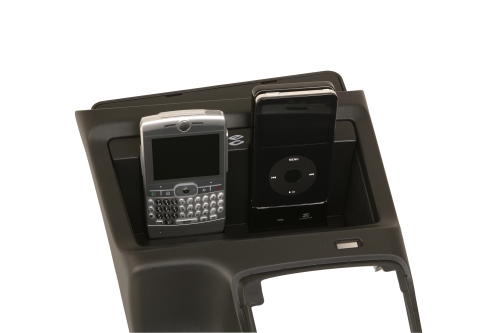 The biggest problem with modern devices is keeping them charged. How many times have you needed to make an important call only to find your cell phone battery was too low. How about going for that run and your iPod batteries die half way through because you forgot to charge it. Well Herman Miller along Fulton Innovation may have a solution for you.

Fulton Innovation’s eCoupled techology allows for wireless recharging of any device. Herman Miller is licensing the eCoupled system in order to build desks with the technology built in.

There is a catch however. The device must be compatible with the eCoupled system. That’s right, in order to use the technology your mobile phone or music player needs to be compatible with eCoupled. There are adapters available for most mobile devices but plugging in a device to an adapter defeats the purpose of having a wireless recharger in the first place.

Herman Miller did not say when the desks featuring the technology might be available. Our guess is that wide spread adoption of the technology is still a few years off. Also it would require a critical mass of mobile device manufacturers to adopt the eCoupled standard which would be almost miraculous if it happened.

Visteon, an auto parts maker is also working with the eCoupled technology. Their version would plug into a vehicle’s lighter. Visteon is estimating the cost at around $100. Motorola is said to be working with Visteon to build eCoupled into its phones.

Time will tell if this technology takes off but wireless power is the wave of the future.

[The picture shows a prototype of the wireless desk charging unit]