Posted in Google,News,Yahoo by Paul Patterson on January 16th, 2007 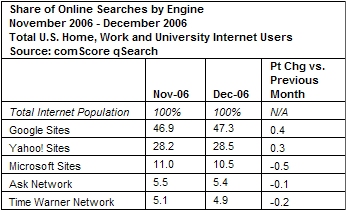 Google and Yahoo! continue to erode U.S. Web Search market share from the competition according to a December 2006 analysis from comScore Networks.

In December 2006, Google increased its share of Web Search by capturing 47.4 percent of the U.S. market. This marks a gain of 0.4 share points from November and continues Google’s impressive run of gaining share in 16 of the last 17 months. Yahoo! continued to maintain its second place ranking by growing 0.3 share points and capturing 28.5 percent of U.S. searches.

The study also reported that Americans conducted 6.7 billion searches in December, up 1 percent from November and up a notable 30-percent since the same month a year ago.