Posted in Google,News by Chris Weber on January 30th, 2007 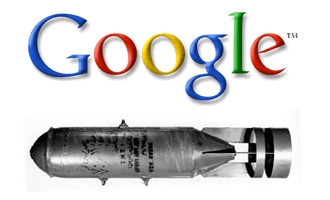 Google has taken action to limit the impact of so called Googlebombs also known as link bombs. According to Wikipedia, A Googlebomb is an “attempt to influence the ranking of a given page in results returned by the Google search engine, often with humorous or political intentions.” The bomb works by relating key works to a link. For instance if you link to site with the words really great technology site, Google will associated those words with the site to which you linked. Now consider if 1000 or 10000 sites do the same thing. If enough sites link to the same site with similar terminology then the target site will become strongly associated with those terms in a Google Search.

Some of the famous Googlebombs involved slights against George W. Bush and Microsoft. The first link bomb linked the term “more evil than satan himself” to the Microsoft homepage.

In 2000, a web site linked to a George W. Bush merchandise store with a expression that cast doubt on the future presidents intelligence. The “W” merchandise site quickly rose in the search rankings for that page and at one point it was the top search result for a phrase that means someone who is not intelligent and does inappropriate things to people’s mothers.

The target site sent a cease an desist letter to the originating site after the incident became fairly well known. The offending cite removed the link.

These Googlebombs are better described as link bombs because any search engine is vulnerable to such manipulation. For instance Yahoo! can be manipulated in the same way. However, Google holds such a commanding lead in the search market that anything related to search is generally related to Google explicitly.

Google has been accused of reflecting its opinion via these search bombs as Google is thought to be a liberal leaning organization and one of their biggest competitors is of course Microsoft. However, until recently Google has defended its position that the bombs are a small side effect of its search algorithm and that the algorithm is generally correct but subject to some manipulation. Google has, probably correctly, considered them harmless pranks for the most part and not worth dealing with.

Lately, however Google had decided to undertake the task of fixing the Googlebomb problem because of the negative publicity and ill will they cause. According to posting on Google’s webmaster blog they have decided to take action because “we’ve seen more people assume that they are Google’s opinion, or that Google has hand-coded the results for these Googlebombed queries.”

According to the article by Matt Cutts, Google’s well known spam and SEO spokesman, Google has corrected the problem at an algorithmic level instead of dealing with the problem manually. In fact Google is known for its algorithms and uses them for everything for search to employment. This strategy has served them well with a stock price hovering around $500.

So next time you try to defame your friends or political opponents via a Googlebomb, keep in mind that the almighty Eye of Google is upon you, and your efforts will be for naught.