Posted in Games,Nintendo,Wii by Paul Patterson on November 10th, 2006 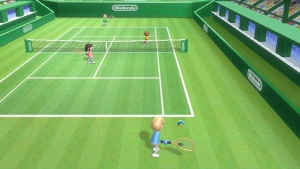 Wii Sports is a collection of five distinct sports games where each game utilizes the Wii-mote controller to provide a natural, intuitive and realistic feel. The game lineup includes Baseball, Bowling, Boxing, Golf, and Tennis. Use the Wii Remote controller to mimic the actions of swinging a racket, bat or club; pick up a spare at the bowling alley; or knock out the champ with a left cross.

Wii Sports allows you to personalize your experience with your own Mii caricatures. Your Mii becomes the character that represents you through a variety of Wii games making for a more interesting experience. As your skills improve, your Miis’ skill levels will also increase, allowing you to gauge how much better you have become.

Baseball - Your character stands in the batter’s box and takes pitches. You attempt to get on base by holding and swinging the Wii remote as you would a regular baseball bat, but it is up to the player to use the correct timing and positioning to hit the ball.

Bowling -You position your character by sliding laterally or rotating on an axis to set up your shot. Once your character starts walking toward the lane, you raise the Wii-mote behind you just like you would an actual bowling ball, and follow through on your delivery to get the ball down the lane.

Boxing - Hold the Wii-mote and the nunchuck in the upright position as a defensive posture. Perform a left or right hooks as well as uppercuts by making those motions with the controllers.

Golf -Hold the Wii-mote in both hands pointing towards the ground while standing sideways in front of the screen and take your best golf swing. It doesn’t get more realistic than that.

Tennis - Your character automatically move to the landing point of the ball. You will then use the Wii-mote to take a swing at the ball. The remote is sensitive enough to add spin to your shot or to make forehand, backhand, volleys, lobs, and slices depending on how fast you swing and at what angle.

People of all skill levels can pick up and play any of the games in Wii Sports, making this truly a title for everyone. Nintendo has recently confirmed that Wii Sports will be packaged with every Wii system.

Previous in series Next in series