Posted in Games,Nintendo,Wii by Paul Patterson on November 13th, 2006 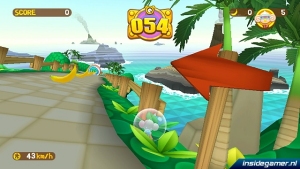 The game features 100 main game levels, over fifty mini-games, boss battles, and lots and lots of jumping. There will many varied situations to use the controller such as minigames, darts, ring toss, and a whack-a-mole variant.

The Wii-mote is held parallel to the ground and then tilted in all directions to move the monkey character through mazes. The monkey is bound to the slope of the game world and moves corresponding with the tilt of the controller. You can make your character jump by quickly flicking controller up or by pressing the A button. Control the camera with the analog stick on the nunchuck but this is not necessary to play the game.

Super Monkey Ball has been a successful franchise for Sega in its limited run. Banana Blitz is scheduled to be on shelves November 14 – days before the Wii goes on sale.