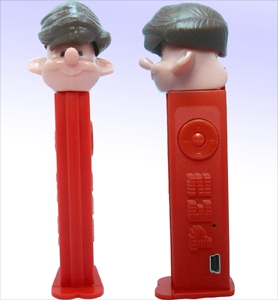 Well, this is pretty much exactly how it looks. It is an MP3 music player that looks like a PEZ dispenser. No, you cannot load it with candy since the AAA battery and the tiny 512 MB player are in the way.

This particular version is the “PEZ Pal Boy”, but there are more versions on the way according the the web site. The player will hold about 120 songs, is compatible with USB 2.0, Windows and Mac’s and plays MP3, and WMA files. It can also be used as a a USB drive for files.

If you tip back the head of the MP3 player/dispenser, the on/off switch is where the candy would normally come out. The feet flip open to load the battery, and there is a play button and USB interface on the side next to the raised PEZ lettering. The player supports both repeat and random modes for song playback.

Interestingly enough, the name PEZ was created from the German word for peppermint, which was the first flavor of PEZ candies, and MP3′s were invented by a team of German engineers. Both PEZ and MP3 also have three letters. Coincidence? I think not.