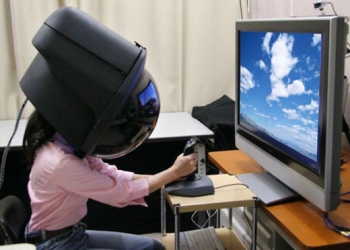 Recently in Tokyo Toshiba has made a helmet with a 40 centimeter dome shaped screen to provide wearers a 360 degree view of whatever they are watching on television, whether it is a TV show, movie or a video game.

The Space Balls reminiscent headgear seems fairly large, and raises the question of how strong the necks of the users have to be to be able to utilize it for an extended length of time. The whole helmet actually weights only 6 pounds, which is fairly light weight compared to most motorcycle or space helmets.

Inside the helmet, there are infrared sensors that can detect which way the users head is facing, and then uses a small projector in the top back of the helmet to change the picture they are seeing accordingly in an attempt to give a real-life feeling simulation of being somewhere else inside the game or television show.

This helmet from Toshiba is not currently commercially available, and Toshiba states that they have no plans for releasing it as of yet, but it could have some great entertainment implications in the near future in making a more realistic virtual reality environment for computer gaming and watching movies.