Posted in Games,Nintendo,Wii by Paul Patterson on October 29th, 2006 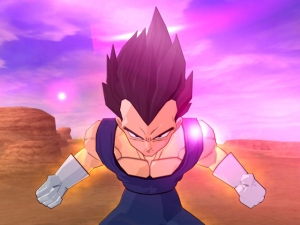 Budokai Tenkaichi 2 features lightning-fast melee with elements of RPG and action-adventure gameplay. Players engage in epic battles set in 15 vast and highly-destructible environments. The environments feature the high level of interactivity you have come to expect from the previous games with massive 3D destructible realms and an abundance of game modes.

Fans of the series can reenact their favorite ki-powered techniques with a roster of more than 100 characters from the pantheon of Dragon Ball Heroes. The game features every major character in the Dragon Ball Z inventory at your disposal to experience many of the epic battles featured in the television series. Gameplay is expected to take over sixty hours to complete in single player mode.

Dragon Ball Z: Budokai Tenkaichi 2 offers two major control options. The game can be played using the GameCube controller or Wii Classic controller; or gamers can use the Wii-mote and Nunchuk combination for a truly unique Wii experience. 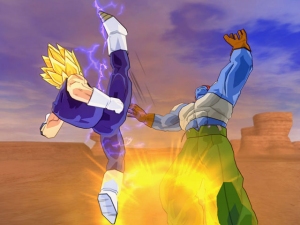 Primary character control is accomplished by using the Wii-mote and the analog attachment to fight. You move your character around the world with the analog stick. Primary melee attacks use the A button while the projectile attacks and the ki blast is triggered by the B button. You will jump with the C button and use the Wii-mote’s D pad to block.

Mixing button pressing with various waving techniques you can perform more advanced movements and attacks. For example, make your character dash by pushing a direction and shaking the analog attachment or change your elevation when flying by holding the C button and tilting the controller up or down. Super attacks are triggered by holding down the Z and B buttons and moving the Wiimote and analog attachment in one of several unique motions for that specific character.

Previous in series Next in series