Posted in Games,Nintendo,Wii by Paul Patterson on October 28th, 2006 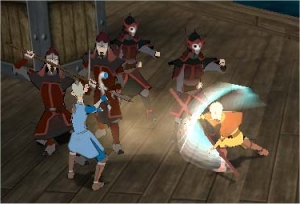 This is the first installment in a multipart series featuring the games for the Nintendo Wii. The series will focus on how game developers make use of the Wii controllers to create a unique gaming experience. This installment will feature Avatar: The Last Airbender from THQ. 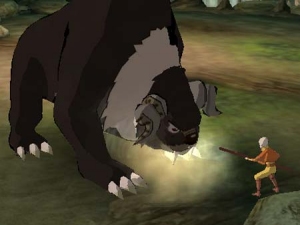 Avatar: The Last Airbender is based on the popular Nickelodeon cartoon, and lets you play as Aang, Katara, Sokka and Haru. The Last Airbender takes place in a magical world containing humans, unique animals, and supernatural spirits. The Human faction is divided into four nations: the Water Tribes, the Earth Kingdom, the Fire Nation, and the Air Nomads. Each nation contains people called benders who possess a unique ability called bending which allows them to control their native element such as water bending, earth bending, fire bending, or air bending.

Each generation contains a bender called an Avatar who has the power to manipulate all four elements. The story follows Aang and his friends, Katara, Sokka, and Haru, as he attempts to follow his destiny by harnessing the power of the earth’s elements. Aang runs into many enemies throughout his journey and must rely on his wits and the help of his friend’s to defeat his adversaries.

The game allows you to control Aang, as well as his pet and three friends: Haru (earth bender), Katara (water bender), Sokka, and Aang’s pet Momo. The characters are primarily controlled with the analog stick, but combat managed with a combination of waving the Wiimote and pressing the A button. Players can also draw symbols using the Wiimote in a time-based series of gestures called Focus Moves, which allow to enable special moves. You can make use of your elemental powers by holding the B trigger on the Wiimote and wave the controller horizontally or vertically.

Avatar: The Last Airbender is scheduled to ship this fall for Wii and other gaming platforms.